by Zac Palmer, of Fitness Gear and Training 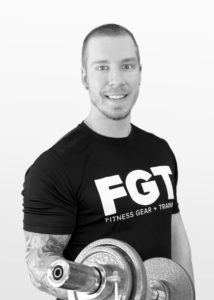 Zac Palmer is a Power Partner in the Flourish Health and Wellness Summit Series, and is owner of Fitness Gear and Training. He is a powerhouse with understanding the body and fitness.

Zac writes, “It’s hard to find a dinner more satisfying than a steaming plate of flavorful pasta, but by now you’re well aware of just how fattening that is. Let’s not give up on our favorite pasta dishes…let’s make these dishes lighter, healthier and just as delicious by using noodles made from vegetables, rather than traditional, carb-laden pasta.

If you’re new to cooking with veggie noodles, have no fear! It’s simple and satisfying to create comforting guilt-free pasta dinners, and I’m going to show you how…”

Spaghetti squash is the easiest of all the veggie noodles to prepare since the noodles are already formed in nature. Cut a spaghetti squash in half and you’ll find a mess of seeds and stings in the center of thick, firm, yellow flesh. The seeds and strings are discarded, and that thick, firm, yellow flesh is cooked until tender and scraped off the skin, into a neat pile of soft spaghetti-like noodles. Pretty cool, right?!

Zucchini is such a tender squash that it really doesn’t require cooking, and in fact cooking zucchini noodles quickly turns them to mush. I’ve found that pouring hot spaghetti sauce over a pile of zucchini noodles is all that it needs to heat it up without causing it to get mushy. You’ll need a spiral slicer –a little kitchen contraption that spirals zucchini through grating holes to create long, spaghetti-like noodles.

While zucchini and spaghetti squash noodles are light and soft, noodles made from butternut squash are a bit heartier. Not only does this translate into a more filling meal, it also means that need to be cooked on their own, before applying the spaghetti sauce, in order to achieve a tender consistency.

Now there’s a little bit of technique involved with cutting your butternut squash in the best way to run it through a spiral slicer. I’ve found that the narrow part of the squash, that’s completely solid, is the piece that works really well with a spiral slicer. Slice off the skin and then simply run it through the slicer. The part of the squash that’s hollow in the middle is trickier to use with the spiral slicer, since those pieces are pretty thin. A quick option is to simply chop those pieces thinly and use that along with the long noodle strands.

Talk about truly guilt-free pasta – one made from asparagus spears! Rather than serve this one with traditional spaghetti sauce (although you could) I’ve included a dressing to toss the noodles with and I’d recommend serving it with meatballs for some added protein.

Eating healthy, low carb meals like these are what it takes to have that lean, sexy body that you want. But don’t forget that a fit body also requires a consistent, challenging exercise program! Call or email me today and get you started on the fitness plan that’s custom designed for you. Let’s do this!

Judge the food that you eat based on how nutritious it is. How full of vitamins, minerals, fiber and protein is it? Does it contain vital nutrients in each bite? Be picky about what you eat – and avoid those items that aren’t crammed with nutritional purpose. This is another reason that veggie noodles are superior to traditional noodles – simply compare the nutritional content of the two! 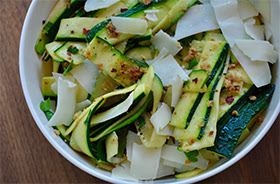 Here’s another guilt-free pasta recipe for you! You won’t need a spiral slicer for this one, simply use a regular veggie peeler – like the kind you would use to peel the skin from a potato – to create long, flat zucchini noodles. This recipe has a scrumptious, nutty flavor that will make you forget all about traditional noodles. Feel free to serve with some sliced chicken breast, sliced hard-boiled eggs or steak for added protein. Enjoy!

Here’s what you need…

The Amazing and the “SUNSATIONAL FLAVORS” of Spearmint, Cumin, Tangerine, and Dill! From antioxidants for assisting your body with building immunity to digestive health and tummy relief, these four oils have some wonderful benefits and a wide variety of uses. These oils are are only available during the summer time: https://www.mydoterra.com/liveloveessentialoils  TANGERINE: This is absolutely my most favorite oil…. View more

LAVENDER LEMONADE Print Lavender Lemonade Recipe type: Summer Drinks Prep time:  15 mins :  15 mins Total time:  30 mins Serves: 8   This recipe is extremely refreshing, excellent for house parties, such as baby or bridal showers, afternoon get-togethers. Not only are you drinking something refreshing, it is healthy and taking care of your body. Why… View more

The Fabulous Trim Shake Recipes! Slim & Sassy® Metabolic Blend* at only 125 calories per serving, you can have a great time making and experimenting with different ingredients!!  My husband Larry makes  me a shake every morning, and we honestly can not survive a morning if we miss making a shake. What he makes is a shake… View more

This recipe was given to me by my friend Dawn, and I added the essential oils to it!  Perfect for potluck picnics… it one of those that you can’t stop eating, so you might as well double the batch.   Cookie Layer Ingredients Take 1 package of sugar cookie dough, or make a recipe batch.  Add 4… View more